Skip to main content
X
Request More Info
This will only take a moment. 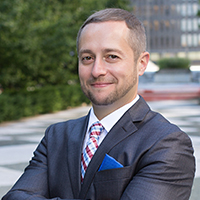 Peter D. Giglione is an adjunct professor of law and coordinator of Duquesne Law’s Trial Advocacy Program, overseeing all trial courses and the trial moot court program. He teaches legal issues in healthcare courses to undergraduates and master’s and doctorate degree candidates in the Rangos School of Health Sciences at Duquesne, and trial advocacy courses to second- and third-year law students at the School of Law.

Giglione is a partner with Massa Butler Giglione. Prior to joining Massa, he worked for a large national law firm for over nine years as a trial attorney. Throughout his 16-year career, Giglione tried multiple nursing home abuse and neglect, medical malpractice and other types of lawsuits to verdict. He has obtained millions of dollars in verdicts and settlements for his clients. While Giglione’s practice has focused primarily on representing victims alleging nursing home abuse and neglect and their families, he also represents plaintiffs in other types of cases, including automobile collisions, premises liability, consumer protection, medical malpractice and products liability. In addition to trying cases, Giglione has successfully argued appeals before the Pennsylvania Superior Court and the Pennsylvania Supreme Court, two of which resulted in published decisions that are now binding precedent in Pennsylvania.

In 2017, his peers voted Giglione as a “Super Lawyer” in the Pennsylvania Super Lawyers rankings, after being named a “Rising Star” in the previous seven years. In 2013, he was named a “Top 40 under 40” trial attorney in Pennsylvania by the National Trial Lawyers organization. That same year he was inducted into the prestigious Academy of Trial Lawyers of Allegheny County, an invitation-only group limited to 250 active members.

In addition to his academic responsibilities at Duquesne, Giglione frequently lectures for various Continuing Legal Education courses, serving as course faculty for the Pennsylvania Bar Institute, the Pennsylvania Association for Justice, the University of Pittsburgh Consortium Ethics Program and the Allegheny County Bar Association. In 2012, he lectured at the annual Pennsylvania Conference of State Trial Judges (an annual conference attended by most Courts of Common Pleas judges, as well as judges from the Pennsylvania Superior Court and justices of the Pennsylvania Supreme Court) about elder abuse and neglect in nursing homes.

As a student at Duquesne Law from 1999 to 2002, Giglione was the recipient of the Katie Elisabeth Westbrook Award, which is awarded annually by the faculty to the student who expresses the most passion for trial advocacy. Also while in law school, Giglione was elected to the Justice Louis E. Manderino Honor Society and the National Order of Barristers by the law school faculty. In 2008 he was awarded a citation by the Pennsylvania House of Representatives in recognition of his work coaching Duquesne Law’s trial moot court team, which won the prestigious Tournament of Champions national trial competition that year.